The Dash - Album Preview and Preorder 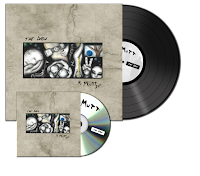 That is right kids, the record is wrapped up, mixed, mastered and off to manufacturing.   Barring any unforeseeable disasters at the Cleveland production plant, we should have LP and CD's in the mail to all preorders by mid March.   As promised we are going to be previewing songs, one or two a week, for the next two months leading up to our Shank Hall Gig with dada on March 1st.

"The Dash" is R. Mutt's 5th full length recording of original music.   The record marks the first studio appearance of both Dave Smolarek on guitar and Matt Schreier on drums, who are joined by the band's primary song writers and vocalists, Ron Thornton and Jim Dier.   The band enlisted the help of friends of the band Jamie Kane and Michael Stodola for some key lyrics.

This album presents a more aggressive and emotional sound than recent releases due in no small part to the creative direction and prodding of producer, Kevin Blackwell.  Kevin signed on to be producer/collaborator/den mother upon his move from Portland to Milwaukee.   Kevin also called in his good friend and mix engineer Chet Lyster (The Eels, The Jayhawks, Lucinda Williams)  to put an edge on the sound not present in our past recordings.

So, in the space above we will be sharing the playlist of the new record. We will add a song or two to the playlist every week.   Keep visiting to hear the whole album.   If you just cannot wait to have it all, we are taking LP and CD preorders as well as digital download orders right now, which will grant you an immediate download of the entire album in the format of your choosing.

We hope you all like this record as much as we do.  Give her a listen, let us know what you think and see you at Shank Hall on March 1st.