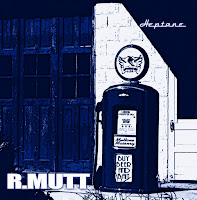 Sometime in 2004 the original four members of the band hatched the idea to build a small recording studio to record an album of new material. We had loved the time spent in professional studios to record our prior projects, but always felt we rushed ourselves due to the cost. Back then, we were either unemployed or working hourly jobs so paying $45/hour to see if we could get a cooler vibe by using a different amp or guitar, or spending two hours on a creative vocal back up idea never seemed to make sense to us. First and second takes were all we could afford and "no obvious mistakes" had to cut it.

What we wanted this time was to be able to spend months in the studio letting creative ideas fly and recording everything we did. To be able to do this, we decided, required our own studio.

The process of designing and building a room, treating that room for proper acoustics, buying gear, learning how to set it up... that was a dream. Having a general interest in electronics, soldiering, wood working, sound, space, computers and most of all music, played really well for us. Within six months we had everything set and running and even engineered, recorded and mixed a full album for some of our good friends, with what we thought were great results. (Dan Whitaker Country Band: Your Final Ride)

Feeling good about our progress and prospects, our own song writing began. Before we even got to hit the big shiny 'RECORD' button, personal schedules began to interfere with band schedules. We had band members living in two different states with as much as a 90 minute drive separating some of us. And, to make things worse, it turns out between 1996 and 2004 we had all gotten jobs. We fought through scheduling trying to fit in practices as much as we could but, in the end, wound up with a record that only two of the original members played on and only three contributed songs to.

While we didn't get to realize our dream of kicking back and exploring in the studio as we had originally planned, we did put out a kick ass album of all brand new original material. To get it done we called in favors from some great players and friends, pieced together a virtual band and, in 2007, released Heptane as the fourth R. Mutt recording project.

If the embedded player below does not work, the direct link is here: http://r-mutt.bandcamp.com/album/heptane

You can click the player above to go to the hosting site to download the album for free (you have to go to each song page to download then when asked to enter your price, choose $0.00.) We also have copies of the original CD pressing available for sale on our Facebook merch page.

I thought I would share this story now because we are on the verge of beginning to mix our fifth album and this time we were lucky enough to record and write it as a band. We are right at the end of tracking lead vocals and some guitar solos with our new guitarist, Dan Power. Everything is sounding great. More on the new album in our next post! Until then, please enjoy Heptane!