For the past 5 years Bradford Beach on the shores of Lake Michigan in Milwaukee has hosted the Endless Summer Beach Party which includes a bunch of sporting events and also Jigglesfest, a free, all day music festival.

We first got involved with Jigglesfest when it was revived from dead in 2008 (documented here)   We have since become one of the anchor bands providing some of the backline and helping pull the bands together.   The event is a laid back way for musicians to connect or reconnect with one another.   All the bands play for free, the event is free and the team that runs Bradford Beach and all of the Volleyball events throughout the summer takes care of permits, staging and sound.

Here is the line up and schedule:

Billy Shakes is fronted by John Gentile who served a tough tour of duty as our lead singer in the very early 90's when we were still playing primarily on campus at Marquette.   Johnny went on to found Ventriloquist Cat who shared the stage with R. Mutt on numerous occasions.   When VC was between bassists Johnny asked me to fill in on bass for their original 4 song demo.  Drew, from Billy Shakes, also played at Jigglesfest 2008 as part of Planet Dastardly.

Stereoactive is a great three piece that has some linage tracing back to 2008's Planet Dastardly and 2011's Sky Parlour.   We have also shared the stage with them at Linneman's and hope to road trip to Chicago for a show with them in the coming months. 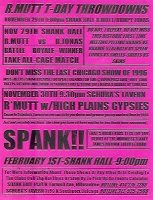 The Gyps (formerly Great Plains Gypsies, formerly High Plains Gypsies) are fronted by Dan Whitaker who Ron and I have known since High School in IL.   NIU and Marquette alums will remember Dan from his band Junebug Massacre who R. Mutt played many bars, festivals, basements and house parties throughout IL and WI.   Dan also handled most of the lead singing on our record, Heptane.  Ron and I have also worked on most of Dan's last recording projects for both the Gyps and his other project, Dan Whitaker and the Shinebenders.

In the early 1990's, Moloko Shivers was introduced to us by the old owner/talent buyer at The Boardwalk (which was then The Globe, then Live, and now Hotel Foster.)   Both bands were pretty new and looking to play the east side and he rolled the dice on us and put us on a double bill.   Since that time our bands have been intertwined in a myriad of ways.   Dave Schoepke and Randy Komberec performed on our '96 release Earth to Guy and Heptane.   Those two also teamed up with former R. Mutt guitarist, Mike Bellante, for two shows supporting other regional acts called The Bellante Project.   Mike Peters, Randy, Dave and I all perform (along with Big Al from Moses's Gunn) in the James Brown Revue band, SPANK!!  Moloko has a new record coming out and this show will the the formal release party for it.

When R. Mutt first started playing back in 1988 at Marquette the #1 band on campus was Surrender Dorothy.   Serving up a seemingly never ending set list full of great originals and choice covers, they have been a favorite of MU grads for years.   They also have a new CD that they will be debuting at the beach.

Bright Kind includes Jeanna Salzer, Harrison Dole and Alex Bunke (you may remember them from when they performed 2 years ago as The Jeanna Salzer Trio.)  They were the clear stand out favorite of  the attendees and bands alike.   They recently underwent a transformation and name change to Bright Kind, and we are looking forward to hearing new music from them.   Harrison holds the unique honor of being the only musician to perform at every Jigglesfest since 2008, never with the same band, rarely on the same instrument.    For those keeping score:

The night will wrap up with Moses' Gunn which is a rebirth of the original line up of Bumpy Jonas.  Throughout the 90's R. Mutt played a number of double bills with Bumpy at Shank Hall and elsewhere in the Milwaukee area.   This reformed line up was brought back together for last year's Jigglesfest and I guess it felt good enough that they decided to keep on pulling it out.

So, we are pretty jacked up to be back at the beach for an event that is open to the public and all ages.   The food and drink at the beach is now top notch so grab some chairs or a blanket or something and plan on spending the whole day down at the beach with us.

You can follow the MAP HERE.  Hope to see you out at the beach!